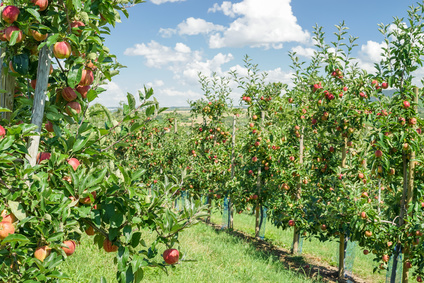 Everything you need to know about the domestic apple tree, from identification tips to typical characteristics; how to spot disease and the best methods of apple tree care.

Whilst the domestic apple tree is not native to the UK, it is exceptionally popular across the country and a real favourite of the English garden. There are over 7,500 cultivated apple varieties across the world making this a truly versatile tree, well known for its striking blossom. Not to be confused with the crab apple, which is native to the UK, the common apple bears a huge variety of much larger fruits including the Gala apple, the George Cave apple and the Chivers Delight apple as well as the much renowned Golden Delicious apple.

A Selection of the Different Varieties of Domestic Apple

There are so many different apple cultivars that fall under the category of domestic apple. Here are some of the most popularly grown in UK gardens:

Chivers Delight: A dessert apple that becomes ready to pick in mid-autumn and that will store until mid-winter. Depending on the level of sunshine it has been exposed to, the fruits will appear a red-flushed, yellow with sweet-flavoured crisp, juicy flesh.

Blenheim Orange: This apple offers an almost spicy flavour with a soft nuttiness. Best grown alone due to its tendency to develop apple scab, the tree tends to grow vigorously and does well in cold, wet climates. The apples are yellow-green in colour and gradually become a flushed orange-red. Use from late September for cooking and from October to January for eating.

Discovery: This is an early season apple and one of the first to harvest in August. Depending on the level of sunshine through July and August, the bright redness from the skin can filter into the flesh which on pressing serves up a delicious pale pink juice. Fruits will only tend to last to September.

Egremont Russet: A well-known apple with a characteristic nutty texture and a floral taste that captures the essence of the blossom. It’s good for storing, and the flavour will mature to honey over time. Apples are yellow-green, ripening to a half-flushed brown-red hue covered with russet. Use from October to December.

Gala: A dessert apple that appears in mid to late season after the pink and white blossom has subsided. Pick during the autumn and store till mid-winter. Yellow-skinned with a red, striped flush. The flesh is juicy and creamy with a rich flavour.

Golden Delicious: One of the most popular and well known apples, Golden Delicious is a dessert apple that acts as a good pollinator for other apple trees. Fruits are greenish yellow to start with then grow yellower as they mature. Once they are fully ripened, these apples are honey-sweet. These fruits store very well and will last through from November to February.

Scrumptious: A bright red dessert apple that follows pale pink flowers. The flavour is complex and fragrant with honeyed tones. The fruit has a short season, only from September to October.

Apples are a favourite source of food amongst wildlife. Thrushes and bullfinches enjoy the buds, whilst blackbirds seek out bushier apple trees as an ideal nesting spot.

The apple is considered the fruit of fertility and eternal youth according to Norse mythology. It is reckoned that if you fall asleep in an orchard, you may wake up several years later, and that treasure buried under an apple tree will never rot, nor be found. Halloween apple bobbing is said to have come about because the combination of the water and fruit has the power to put you in touch with the fairy kingdom and if you take a bite from an apple on Halloween then sleep with it under your pillow, you will dream of your true love.

Apples originated in Eastern Europe and, as travellers through the fruit forests ate the fruit and discarded the pips, so the trees spread across Europe and into the Baltic regions.

Henry VII was said to pay significant sums for individual apples, and Henry VIII had his own orchard in Kent where many different varieties were grown. He even imported French gardeners in to tend to them. Catherine the Great adored Golden Pippin apples so much that she would have them brought to her Russian palace, each wrapped in paper made from real silver. Queen Victoria also adored apples, especially of the baked variety, and it was during her reign that there was a huge increase in the number of apple varieties being grown.

The Importance of the Domestic Apple

The domestic apple and its many cultivars are used for eating, cooking and cider production. Apple wood doesn’t tend to be used for general furniture making as it is a high density timber and is therefore challenging to work with, however it is used occasionally for fine carving.

Caring for a Domestic Apple Tree

The domestic apple tree needs a lot of care and attention if it is to grow strong and healthy and produce large crops of tasty, quality fruit. Apple tree pruning can be quite a complex task and the process must be specific to the individual cultivar, root stock and training form.

Sadly it is not uncommon for people to halt the growth of an apple tree and destroy or reduce its fruit producing capabilities through inappropriate pruning. There are also numerous threats to the apple tree, which means paying close attention to the health of the tree is vital in order to spot the early signs of disease and pest infestations.

The best possible advice is to engage the services of a qualified tree surgeon to assist you in taking care of your domestic apple tree. That way you can enjoy total peace of mind that it will flourish for many years to come, producing healthy and plentiful crops of fruit and providing excellent aesthetic pleasure.

If you have a domestic apple tree on your land that needs expert tree care, why not talk to Tree Works? As fully qualified and highly experienced tree surgeons, we are able to offer exceptional knowledge on all aspects of domestic apple tree care. For a free, no-obligation quotation, give us a call on 07781 416 354 or get in touch here.