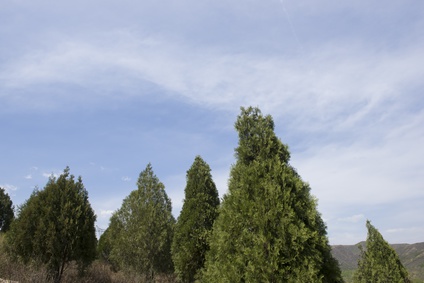 The Leyland cypress is perhaps one of the most infamous conifer trees, well known for its rapid growing habit and towering potential heights of up to 40 metres. Whilst this tree is not native to the UK, it has still become very prominent and is predominantly grown as a boundary hedge in residential gardens, often leading to neighbour disputes.

Many people opt for the Leyland cypress due to its year-round wind and sound absorbing properties and the fact its fast growth provides an almost instant privacy screen, but these trees do benefit from careful pruning and shaping to keep them in check so as to avoid neighbour issues.

Leyland cypress trees are not thought to offer much in the way of value to wildlife, however the dense foliage does provide a safe haven for garden birds.

The Leyland cypress came about as the result of a cross between the Monterey cypress and the Nootka cypress, both species native to North America. However, it is pretty much impossible that this cross first occurred in the wild, as the species’ natural habitats are 400 miles apart. Instead it is thought that the Leyland cypress was created by accident in the 19th century in a Welsh garden nursery and discovered by C.J. Leyland, hence its name.

Due to its relative infancy in terms of history, there is no myth, legend or symbolism currently associated with this tree.

The Importance of Leyland Cypress Trees

The Leyland cypress is a popular privacy hedging plant due to its rapid growth. However, anyone growing these trees should make themselves aware of the Anti-Social Behaviour Act 2003: Part 8. If a hedge (a line of 2 or more predominantly evergreen trees) grows to a height in excess of 2 metres, then it will be classed as a ‘high hedge’ which will be governed by legislation designed to protect people from nuisance. You can read more information about nuisance and overgrown hedges here.

Caring for a Leyland Cypress Tree

In general, the Leyland cypress does not call for much pruning, although it does benefit from trimming in order to maintain its shape. Careful pruning should be carried out only between the months of April and August and three cuts can be made during the growing season once the tree is established.

However, it is important to note that this is a conifer tree that will not withstand hard pruning. Cut into old wood and it will not regrow, so stick to pruning only the young green shoots.

You should also keep an eye on the tree and look for signs of canker and honey fungus. If you spot white fungus between bark and wood, rhizomorphs or decaying roots then this could be an issue. Also be on the lookout for brown patches which could be down to the cypress aphid, scale insects, canker or even over-pruning.

If you have a Leyland cypress tree or any type of conifer on your land that could do with some professional care and attention, why not talk to Tree Works? As fully qualified and extensively experienced tree surgeons, we can offer comprehensive knowledge and skill across all aspects of conifer tree care. For a free, no-obligation quotation, give us a call on 07781 416 354 or get in touch here.