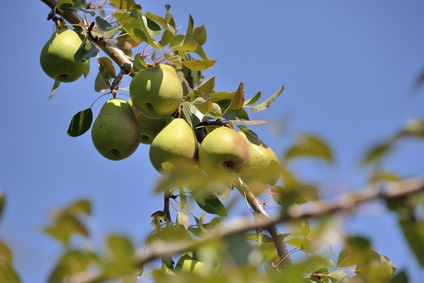 Everything you need to know about the pear tree, from identification tips to typical characteristics; a guide to the different common pear varieties; how to spot disease and the best methods of pear tree care.

The pear tree is common in the United Kingdom but is not a native species, coming from western, central and southern Europe. There are numerous different varieties of pear tree, the most prevalent in the UK being the common pear.

Pear is a hardy tree that grows easily from seed and discarded cores.

A Selection of the Different Varieties of Common Pear Tree

Beech Hill: Beech Hill bears dark green, glossy leaves that transform through striking shades of orange and red in the autumn. Produces clusters of sweet smelling white flowers in mid-spring ahead of large crops of small, round, edible fruit measuring up to 5cm in width.

Beth: A bushy tree that produces a small, yellow-green, sweet-tasting, juicy fruit with a smooth texture used as a dessert pear. Tree grows to 2.5 to 8 metres and produces white flowers in spring.

Conference: The most common pear variety grown commercially, Conference makes the perfect dessert pear thanks to its sweet flavour and soft texture. The tree grows from 2.5 to 8 metres in height. Its spring flowers are white and the fruits are green.

Concorde: The Concorde pear tree is easier to grow than the Comice, but its fruit tastes similar with plenty of juice and a light crispness. After its white flowers have seeded, it produces a small, green dessert pear and grows up to 2.5 to 8 metres tall.

Jargonelle: Jargonelle is one of the oldest pear trees in cultivation. It is one of the longest living varieties and very hardy. Its medium sized yellow-green fruit are juicy and tender and are denoted by a red-russet flush.

Onward: Known for its rich, buttery, sweet fruit, much like the Comice, the Onward variety produces strong, regular crops.

Worcester Black: The Worcester Black originated in Worcestershire in the 16th Century. Fruits are culinary pears with dark-skin and pale yellow, gritty flesh. Spring flowers are white and the tree puts up good resistance to disease.

The flowers of the pear tree are of great interest to the bee, providing a rich food source. Birds such as blackbird and thrush enjoy the fruits, whilst caterpillars consider the foliage of the pear tree a homely habitat that offers food and shelter, aiding them through their transition into butterflies and moths.

Possibly the most well-known reference to the pear tree is in the Christmas ditty, the Twelve Days of Christmas, in which a partridge in a pear tree was gifted by the singer’s true love on the first day of the festive season. Only the English version of this song carries the pear tree reference. The Chinese consider the pear tree a symbol of immortality due to its ability to live, in some environments, to the ripe old age of 250 years.

The Importance of Pear Trees

Pear trees are cultivated to produce the well-known fruits that are enjoyed by so many worldwide as they are eaten fresh, and in tasty desserts. The fruit is also used to produce pear cider, or ‘perry’.

Pearwood is commonly used to craft woodwind instruments and is perfect for wood carving as it resists warping and splintering. Its hardiness also means it is regularly used to make kitchen utensils and wooden spoons.

Caring for a Pear Tree

Pear tree pruning boosts the growth of branches and foliage over the two years that follow. It also slows the production of fruit during that time, allowing the tree to use its energy reserves to grow strong and healthy, making it possible produce much enhanced fruit crops in later years.

Pear tree pruning also improves the structure and shape of the tree, making it both more attractive in appearance and able to support large fruit crops.

The more a pear tree is pruned, the stronger it will grow, providing the tree is healthy. However, it is important to bear in mind that over-pruning will lead to the tree producing vigorous ‘watershoots’ which can overcrowd the crown of the tree. This could lead to disease due to a lack of airflow around the central leader. It is also of great importance to prune a pear tree at the right time of year so as to encourage rapid growth and to avoid the risk of disease.

The wisest advice is to engage the services of a qualified tree surgeon to help you care for your pear tree. That way you can be sure it will receive the attention it deserves and will thrive for many years to come, producing delicious tasty fruit and providing great aesthetic pleasure.

If you have a pear tree on your land that needs expert tree care, why not talk to Tree Works? As fully qualified and highly experienced tree surgeons, we are able to offer exceptional knowledge on all aspects of pear tree care. For a free, no-obligation quotation, give us a call on 07781 416 354 or get in touch here.