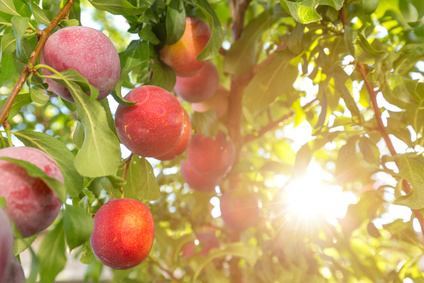 Everything you need to know about the plum tree, from identification tips to typical characteristics; a guide to the different common plum varieties; how to spot disease and the best methods of plum tree care.

The plum tree is part of the same family that produces damsons and greengages. It presents many varieties that cross pollinate to bear fruits ranging in colour and flavour. Plum trees are not native to the United Kingdom but are still common in this country with their tasty fruits traditionally used to make jam and fruity wine as well as being eaten fresh, and dried as prunes.

A Selection of the Different Varieties of Domestic Plum Tree

Ariel: Originating from Sweden, this tree produces a red, mottled fruit; round to oval in shape and exceptional in flavour. The tree is very susceptible to canker, and the fruit to splitting, but the sweet taste makes the fruit a real treat to eat fresh.

Avalon: A fairly good resistor to disease, the Avalon plum tree produces an oval or round dark purple-red fruit with a deep yellow flesh that is sweet to taste and soft and juicy in texture. Originates from the UK.

Belle de Louvain: This tree was introduced in 1845 and originates from Belgium. It produces long, oval blue-black fruits with a sweet taste, commonly used in cooking as well as eaten fresh. The tree’s resistance to disease is good and it can tolerate cold winters.

Blue Tit: The Blue Tit plum tree originates from Bedford and is known for producing fruits with a sharp-sweet flavour. Fruits are oval or round with a very good quality of flavour, often used in cooking as well as eaten fresh.

Castleton: This plum tree variety comes from New York and was introduced in 1993. Its fruit has a sharp-sweet taste with good flavour quality for eating fresh.

Czar: The Czar plum tree originated in the United Kingdom and was introduced in 1874. It produces a distinctive purple fruit which is used in cooking as well as eaten fresh. The tree itself is very eye-catching, bearing attractive blossom and bright, colourful fruits. It will tolerate cold winters and the blossom has good resistance to frost.

Kirke’s: Produces a late season dessert plum displaying blue-black skin. The flesh is juicy and sweet with a yellow-green appearance.

Pershore: Originating from Pershore in Worcestershire, this tree produces a long and oval yellow plum, often used for bottling and cooking. Flowers are white and the tree will reach its ultimate height within 5 to 10 years.

President: Introduced in 1901 and originating in Hertfordshire, the President plum tree produces a vibrant purple fruit with a sharp-sweet flavour of good quality, commonly used in cooking and eaten fresh. The tree shows some susceptibility to canker but fair resistance to brown rot.

Butterflies and moths feed on the plum fruit and the tree’s flowers attract numerous pollinating insects. Mammals and birds are also fans of the fruits which provide an excellent food source.

The plum tree is associated with the vitality of life and endurance thanks to its late production of fruit. In Chinese culture, the plum is of significant importance where the blossom of the tree is considered a symbol of strength and a ‘friend of winter’.

The Importance of Plum Trees

The fruit of the plum tree is used extensively to create preserves, jams and alcoholic beverages and plums themselves are eaten fresh and regularly used in cooking.

Plum wood is sometimes used to make musical instruments but because the trees are generally small, it is not widely available.

Caring for a Plum Tree

It is important to train a plum tree during its early, formative years, and to pay regular attention to dead-wooding as it gets older. This will ensure plentiful crops of fruit thanks to a strong and healthy structure.

With good pruning over the course of several years, an ageing plum tree can be rebalanced and brought back to a picture of glory and then go on to produce good crops of fruit.

Because plum trees are known for producing large crops of fruit, it is common for the branches to experience a good deal of strain which can lead to breakage. Regular thinning is therefore essential to prevent damage to the tree and to keep it safe.

There are four main methods used to prune a plum tree, some of which are quite involved and do require a certain amount of knowledge.

Plum tree pruning is a skilled craft, particularly if you wish to enjoy abundant crops of healthy fruit and keep the tree looking beautiful throughout the year. For the best results, you should engage the services of a qualified tree surgeon. They will also be able to spot the signs of disease and pest infestation, which the plum tree can be particularly prone to. Spotting things like this early will give your plum tree the very best chance of survival.

If you have a plum tree on your land that needs expert care, why not talk to Tree Works? As fully qualified and highly experienced tree surgeons, we can offer extensive knowledge on all aspects of plum tree care. For a free, no-obligation quotation, give us a call on 07781 416 354 or get in touch here.